If you’re worried how you might carry this pepper spray or if it will accidentally discharge, don’t be. It comes in a hard case, has a quick release keychain to attach and detach your pepper spray from your keys in a quick manner, has a safety lock and belt clip. You can put it in your purse, carry it in your hand, use the built-in belt clip, carry it on your keys with the quick key release.

Pepper Spray in Pink Hard Case with Quick Release Keychain. This unit contains 1/2 ounce with 1.2% Major Capsaicinoids (MC), the true heat measure of raw pepper. Pepper Shot is one of the hottest pepper sprays on the market.

This 2 oz WildFire Pepper Spray Sticky Gel sticks to your face like glue. No danger of blowback. Ideal for a windy day. Carry it in your purse, backpack or briefcase.This Pepper Gel Pepper Spray has many convenient features including: longer distance range, stronger pepper mixture, sticks to your face like glue, its also less contaminating, and nonflammable. Ideal on a windy day. 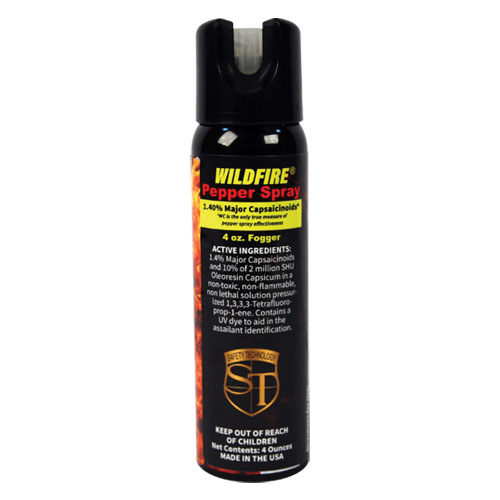 WildFire Pepper Spray Fogger 4 oz is perfect for home use or carrying on your belt (holster sold separate). Take it camping, hunting, hiking, or put it in your bug-out bag or survival kit.
Add to cart

Need a great gift idea? WildFire Pepper Spray is the HOTTEST on the market and makes a perfect gift. Buy this SPECIAL and SAVE 15%. Plus, This special qualifies for FREE Shipping! NOTE: If you want a different color combination, please choose mixed and then write in the Note section at checkout, which colors and how many of each color you want.