Spray them with this Pepper Shot Pepper Spray unit and run for safety. Perfect protection for anyone. It comes in a hard molded case, has a quick release keychain to attach and detach your pepper spray from your keys in a quick manner. This spray also has a safety lock and belt clip. Great for walkers, joggers, runners, college students and real estate agents.

Pepper Spray in Red Hard Case with Quick Release Keychain. This unit contains 1/2 ounce with 1.2% Major Capsaicinoids (MC), the true heat measure of raw pepper. Pepper Shot is one of the hottest pepper sprays on the market.

Pepper Shot 1.2% MC is made of 2 Million SHU’s (Scoville Heat Units) of raw pepper. This 1/2 ounce unit has a range of 6-8 feet and contains 6-10, one-second bursts. It comes in a hard case, has a quick release keychain to attach and detach your pepper spray from your keys in a quick manner, safety lock and belt clip.

Pepper Shot Pepper Spray is one of the most effective defense sprays on the market. Perfect to carry in any and all situations for protection. Great for walkers, joggers, runners, college students, and real estate agents.

Need ease of carry for your 4 oz Pepper Shot Pepper Spray in a holster on your hip? This Leatherette Holster with metal belt clip makes it easier to carry and is what you need. Holster Only. Pepper Spray sold separately.

Holster for the 2 oz Pepper Spray

Leatherette Pepper Spray Holster for the 2 oz Pepper Shot Pepper Sprays. Carry it on your hip for ease of carry and quick access. DOES NOT fit flip top designs.

The Facts About Defense Sprays 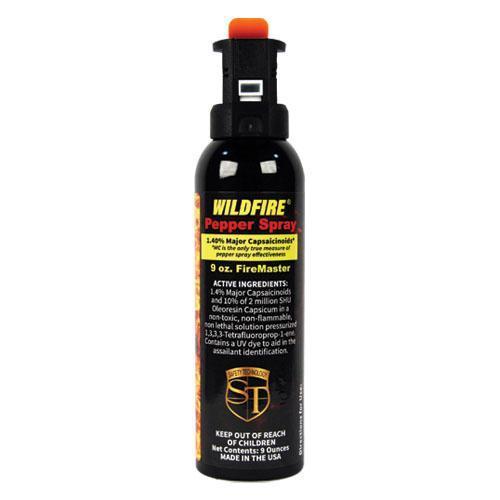 This 9 oz WildFire Pepper Spray Fire Master Fogger model is great for crowd control, correction, and security. Use if you have one threat and it's also ideal if you have more than one threat or attackers at a time. Keep it in your home, camper, or in your survival gear. This item qualifies for FREE Shipping!