Our Police Force Stun Baton Flashlight might just be the perfect self defense tool for you whether you are a law enforcement officer, security guard or home owner protecting your property and family.

Our Police Force Stun Baton Flashlight might just be the perfect self defense tool for you whether you are a law enforcement officer, security guard or home owner protecting your property and family. This model is made of military grade aluminum alloy and powered by a rechargeable lithium battery.

Military Grade Aluminum Alloy Baton: The shock proof exterior allows it not only to be used as a self defense weapon for striking an assailant but it can withstand rugged use and extreme conditions often encountered by the military and law enforcement officers.
Powerful Stun Baton: Combining the power of this 9 million volt stun baton with our Triple Stun Technology (TST), the bright and loud electrical burst illuminates the entire top of the stun baton and will quickly take down an attacker.
Blinding 3 Watt CREE LED with 5 Light Modes: It will not only illuminate the entire area at night but can also be used to protect you. When shined in the eyes of an attacker, the ultra-bright 140* lumen light can have a temporary blinding effect making it easy for you to immobilize them with the stun baton or strike with the baton. (Note: 140 are the actual lumens. Some companies will exaggerate this number and claim a light this bright to be 280 lumens or more).

Protecting Yourself: Identify the threat: An attacker will use the cover of darkness to sneak up on their victims and to hide their identity. They’ll also look for the most vulnerable victim. This powerful light beam shined in the direction of a possible attacker is often enough to persuade him to go in search of an easier target.
Disorient the Attacker: Shining the ultra-bright light directly into someone’s eyes will cause several seconds of disorientation and impaired vision. The Police Force Stun Baton Flashlight with 9 million volts boasts a bright light beam with Self Defense Strobe that can disorient your attacker and give you time to flee for safety.
Strike or Stun: If the first two are not enough to deter your attacker a blow from the metal baton or a shock from the powerful stun baton certainly will.

Police Strength Protection: Engineered to meet the demands of Police, Military, and Security Professionals but also available to civilians.
Triple Stun Technology: The SWPFTB9R incorporates Triple Stun Technology (TST) which allows the electrical charge to alternate between three separate points on the top of the stun baton (two sides and the middle). This loud and bright electrical burst illuminates the entire top of the stun baton. Just the sight and sound of this intimidating electrical charge is often enough to stop an attacker.
Tactical Striking Edge: Increases effectiveness as a self-defense weapon and as an emergency glass breaker.
Military Grade Aluminum Alloy: The shock proof exterior not only protects the unit from damage but can also be used to strike your assailant.
No Slip Grip: The diamond pattern on the rubberized handle ensures a firm grip.
Blinding 3 Watt Cree LED Light: Not only will the flashlight safely illuminate the entire area at night, but it can also help to protect you. When shined in the eyes of an attacker, the ultra-bright light can have a temporary blinding effect making it easy for you to immobilize them with the stun baton or strike with the baton.
Long Life Bulb: The LED Bulb will last up to 100,000 hours.
5 Light Modes: There are three light strengths (maximum, medium, and low) and two light patterns. When the situation does not require maximum light strength the other two settings can be used to extend battery life. The strobe light mode can momentarily blind an attacker and the SOS rescue light pattern can signal for help in an emergency.
Long Reach: At almost 17 inches long this stun baton is long enough to keep you a safe distance away from your attacker but short enough to carry on your belt using the metal clip.
Rechargeable: Recharging cord (included) plugs directly into a standard wall outlet.
Economically & Environmentally Friendly: The stun baton and flashlight are fully rechargeable and the light bulb has a life of up to 100,000 hours.
Safety Features: To prevent accidental discharge, two levels of safety have been built in.
Metal Clip and Wrist Strap Included: To make it easier to carry, a metal belt clip and wrist strap are included.
Lifetime Warranty: Manufactured using the highest quality components. 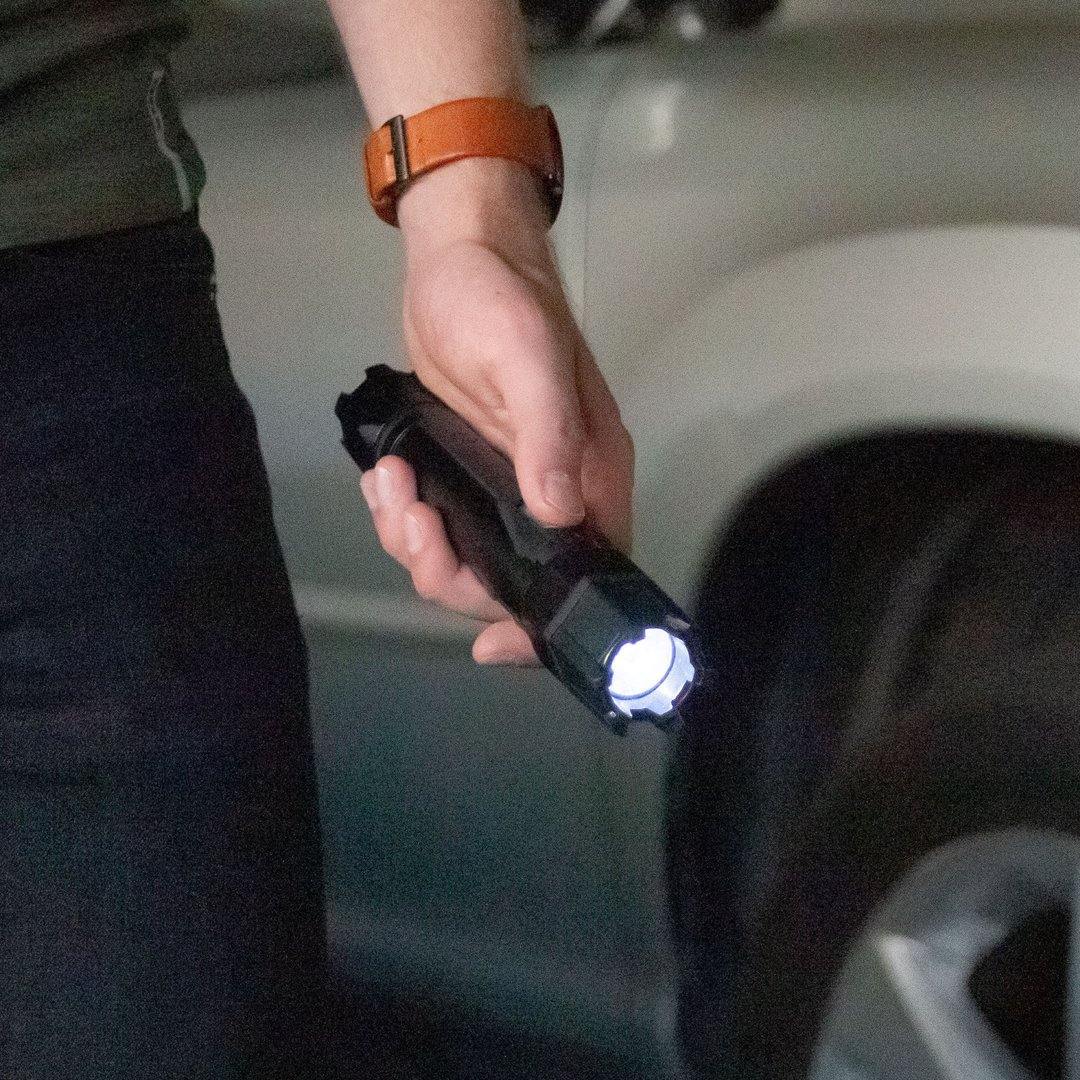 TASER Strikelight Flashlight Stun Gun is a great self defense product. It is light-weight and a perfect addition to your glovebox or as a self protection tool for hikes or late night dog walks. This item qualifies for FREE Shipping!

Pink Lipstick Stun Gun with flashlight is portable and discreet. It packs 3 million volts of charge and is powered by a built-in rechargeable battery. Measuring only 5 inches tall and 1 inch around, this unit can fit into most any purse, pocket, backpack or briefcase.

CELL PHONE STUN GUNS look like ordinary cell phones, but do not function as a cell phone, only a stun device. Cell phone stun guns offer you discreet self protection and security and have the best disguise of all stun devices. The Smart Phone Stun Gun is the most realistic looking one and has the highest voltage of any on the market. Comes with Lifetime Warranty.

Protect yourself with the Police Force Tactical Stun Flashlight which provides 9.2 Million Volts of power. This unit is perfect for military, police, security guards, and civilians. Carry this unit with the included holster, in your hand using the wrist strap, pocket, purse, or book bag. Take the stun flashlight with you on camping trips, put one in your bug out bag or add it to your survival gear supplies. Usage of this unit is endless.