It’s HOT and the ideal defense spray to keep you safe. WildFire Pepper Spray is the HOTTEST on the market. Ideal to keep you safe while walking, jogging, or running. Perfect to carry around college campuses.

WildFire Pepper Spray Hard Case with Quick Release Keychain Red. This unit contains 1/2 ounce with 1.4% Major Capsaicinoids (MC), the true heat measure of raw pepper. WildFire is the hottest pepper spray on the market. In addition to causing pain, the WildFire 10% oleoresin capsicum formula swells the mucous membranes. This makes breathing very difficult. It also swells the veins in the eyes causing them to slam shut.

WildFire 1.4% MC is made of 2 Million SHU’s (Scoville Heat Units) of raw pepper. The effects of the pepper spray can last up to 45 minutes but does not cause any permanent damage.

This WildFire 1/2 ounce unit has a range of 6-8 feet and contains 6-10, one-second bursts. It comes with a hard case holster, quick release keychain, and safety lock.

Contains 1.4% Major Capsaicinoids (TRUE heat measure)
WildFire is HOTTEST on the market
2 Million SHU (Scoville Heat Units) of raw pepper
1/2 ounce 10% OC (Oleoresin Capsicum)
UV Marking Dye for ID by police if apprehended
Quick Release Keychain and safety lock
Contains 6-10, one-second shots
Shoots up to 6-8 feet
MADE IN THE USA
Available in Red, Pink, Blue, Black
Incapacitate your attacker with this WildFire Pepper Spray so you can get to safety and get help.

Need ease of carry for your 4 oz Pepper Shot Pepper Spray in a holster on your hip? This Leatherette Holster with metal belt clip makes it easier to carry and is what you need. Holster Only. Pepper Spray sold separately.

This 3 oz Streetwise 18 pepper spray is perfect for carrying with you when camping, hiking or just simply going to town. It will create a fog of pepper spray which makes it impossible to miss your attacker.
Add to cart 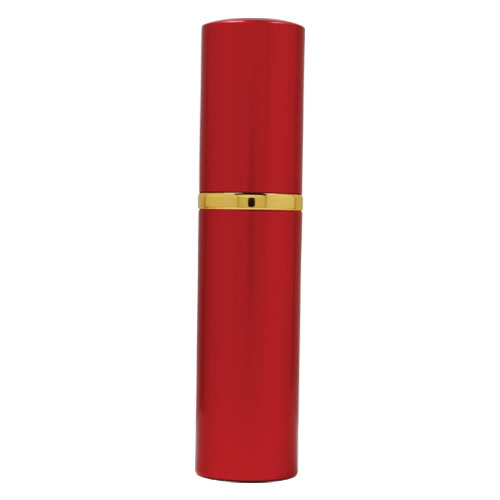 Carry this Red WildFire Lipstick Pepper Spray unit in your handbag, purse, pocket or backpack. Very easy to carry and disguised. Perfect for walkers, joggers, runners and walking to and from parking lots.

This 1 lb WildFire Pepper Spray Fire Master Fogger model is great for multiple attackers, crowd control, military, correction, and security officers. Keep it in your home, camper, take it with you on camping or hunting trips or keep it in your survival gear or bug-out bag. This unit qualifies for FREE Shipping!